The History Of The GS Engine

It's these two engine types that this magazine is mainly concerned with... and which this article will refer to as the GS. 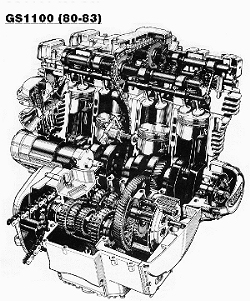 Later on, Suzuki took the 4-valve-per-cylinder GS(X) series into a completely new oil/air cooled engine, which was called GSX the world over. These engines carried large oil coolers, since the oil played an important part in cooling the engine (the SACS system). On the sports series (GSX-R), this system was later abandoned for proper liquid cooling, since it appeared that under stress the SACS bikes lost power as opposed to true liquid-cooled designs.

Side Note: the only bike which debatably still carries the GS signature is the GS500E, which is said to be a development of the GS450S. I may look into that once, but for now I'll leave it to this.

These classic engines have True Grit: no matter what happens, they will take you home.

Why is the GS engine so utterly bullet-proof?

Basically, there are three aspects that set the GS engine apart from its contemporaries of it's time:

And where did the GS Engine get us to today?

The engine in today's Suzuki models such as the GSXR, have a direct lineage to the engine that was designed for the early GS's. In the GS's early years many people were using the GS engine for dragbikes, Suzuki saw a potential market in riders that wanted to go fast and look sporty doing it. So the Katana was designed with that in mind and this quickly morphed into the race bike GSXR.

The GSXR was the developed for the race track where it dominated there. Of course us street folk could not wait to get our hands on them so Suzuki, seeing a big marketing opportunity, made a street legal version. They sold thousands and it's still an extremely popular bike today.

You can take satisfaction in knowing that it started with that GS that is sitting in your garage!